Periods… yes we know all about them… at least we think so!
Yes, you’re obviously aware that every month you loose blood… but do you know that women are on average menstruated for 42 years. With 13 periods per year, that makes up 520 periods… Maybe it’d be a good idea to find out what really goes on.

As a woman, our menstrual cycle prepares us every month for a potential pregnancy. Thanks to our hormones, the uterus thickens and becomes vascularised (increased blood flow) in preparation for receiving a fertilised egg. If no fertilisation takes place, the uterus goes back to its initial state and releases the blood from its tissues, i.e. you have your period which lasts for 3 to 7 days.

It’s not what you think it is and it’s certainly not “dirty”
Menstrual blood is mainly composed of blood, old parts of uterine tissue, cells from the mucus lining of the vagina and bacteria making up the vaginal flora.

Menstrual blood is different from normal blood due to its composition and its physical properties. Put another way, menstrual blood is blood mixed with secretions from the vagina and cervix, old cellular tissue, red blood cells and mucin. The composition of this mixture varies according to the various phases of menstruation which starts with an opaque liquid stage, followed by a thicker stage and then a clear liquid.

Vaginal secretions that are present in menstrual blood are mostly made up of water and electrolytes such as Sodium or Potassium.

The concentration of proteins, cholesterol and bilirubin are also lower than in ordinary blood.

So there, that was a lot about blood in one post :-)
Get more in touch with your blood by using a menstrual cup.

You may also want to read 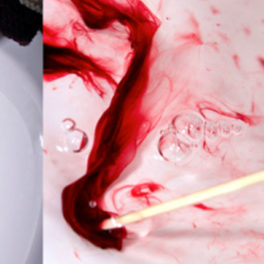 What can your menstrual blood tell you about your health?

Did you know that the features of your monthly period can actually tell you a lot about your state of health? No? Well, Traditional Chinese Medicine (TCM) recognizes this release of bodily fluids as a tremendous source of information as to what is go...